Report as City move a point above Liverpool, who host Tottenham on Super Sunday from 4.15pm on Sky Sports Premier League; Kick-off is at 4.30pm

Manchester City moved to the top of the Premier League until Sunday evening at least with a 2-0 victory over Fulham on Saturday.

The champions are a point ahead of second-placed Liverpool, who have played the same number of games but host Tottenham on Super Sunday, live on Sky Sports Premier League at 4.30pm.

City shot 18 times in the first half, the most by any Premier League away team in a first half this season, and were successful with two; man-of-the-match Bernardo Silva’s low effort from 20 yards (5) put them ahead, before Sergio Aguero’s dinked finish from an angle doubled the advantage (27).

There was a slight concern as Aguero was taken off with what looked like a minor knock before the hour mark as City prepare for a heavy run of fixtures, though Pep Guardiola said after the match it was a precaution and he will be assessed on Sunday. It stayed 2-0 as Fulham remain 19th, 13 points off safety with just six games remaining.

Man of the match: Bernardo Silva

Fulham sat deep in the first half with a back five, but were powerless to City’s surge as Bernardo Silva put the champions ahead within minutes, striking low into the bottom left corner from 20 yards after Timothy Fosu-Mensah’s poor pass allowed Aguero to feed the Portuguese midfielder.

READ  Wenger Under Fire As He Prepares To Join Bayern Munich

Replays showed that Aguero, standing in an offside position from the shot, was in Sergio Rico’s line of view, but the goal stood.

Pep Guardiola made two changes to his last Premier League line-up against Watford. Vincent Komapny dropped out of the squad while Riyad Mahrez was named among the substitutes. Aymeric Laporte and Kevin de Bruyne were back in the starting XI.

There was no Tim Ream for Fulham as Cyrus Christie started in defence. Aleksandar Mitrovic was also absent from the side which lost 2-1 to Liverpool last time out while Jean Michael Seri was also not in the squad. Scott Parker welcomed back Maxime Le Marchand and Ryan Sessegnon as part of three changes.

City piled on the pressure and missed half chances as Ilkay Gundogan’s long-range shot was punched clear and Fosu-Mensah blocked a Raheem Sterling effort, but it was soon 2-0 as Bernardo Silva capitalised on Joe Bryan’s loose pass to feed Aguero, who cheekily squeezed home over Rico from six yards.Sterling wanted a penalty after Fosu-Mensah eventually got a touch on the ball having initially slid in and missed, while Gundogan swept inches wide from 20 yards and Sterling’s curling shot from outside the box after the break was tipped away by Rico.

Aguero, who now has 19 Premier League goals and sits top of the Golden Boot standings, was taken off with 57 minutes gone with what looked to be a slight knock, though Guardiola eased fears of any lay-off after the game.

“Tomorrow we have the real assessment, he says he felt something but not injured. For precaution he decided not to continue, hopefully it’s nothing serious.” 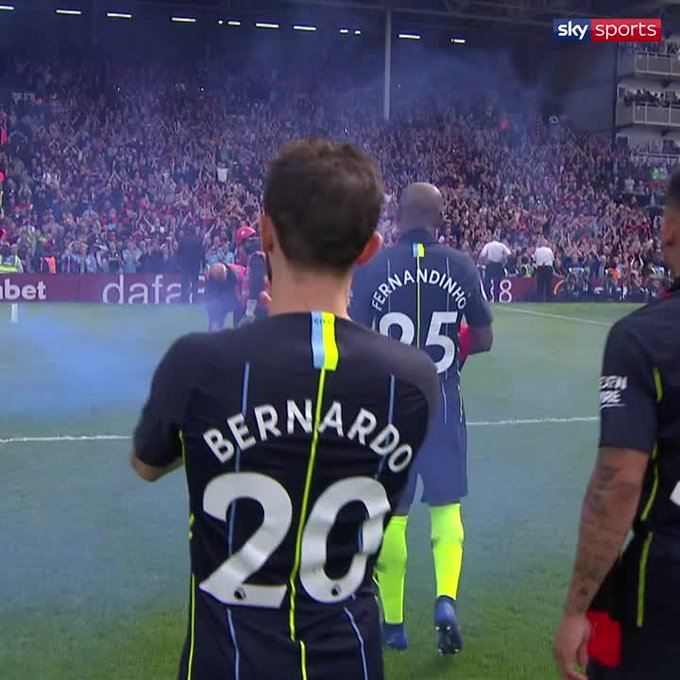 To a man, the Man City players celebrated with their fans at Fulham – donning the red and black scarves in honour of for club secretary Bernard Halford.City strolled for the remainder of the second half, going closest through Kyle Walker as he found himself in the penalty area, striking the outside of the post on the stretch from 12 yards.

Fulham failed to direct a single shot on target for the first time in their last 188 home league games, since April 2010 against Wolves in the Premier League.

Fulham have lost each of their last seven top-flight meetings with Manchester City, only once before have they suffered more consecutive top-flight defeats against a single opponent (8 v Manchester United between 2005 and 2009).

Manchester City have lost on just one of their last 10 Premier League visits to London, winning eight and drawing one.Bernardo Silva has scored in three consecutive appearances in all competitions for Manchester City for the first time.Sergio Aguero has been involved in eight goals in his last five starts against Fulham in the Premier League (5 goals, 3 assists).

Scott Parker on Sky Sports: “It was a tough day. From the outset we knew the challenge ahead was against a really good team. We made a nervous start and when you go 1-0 down after five minutes, it was always going to be a tough hill to climb and so it proved. In saying that, I thought we dug in and showed some bits at times against a world-class side.”

Pep Guardiola on Sky Sports: “Next game on Wednesday [against Cardiff] we are going to change a few players. It is important for the rhythm, Fernandinho is still far away from his rhythm. Wednesday we have another one, Saturday we have the semi-final, Tuesday is Champions League, so we need everybody.

“The guys who didn’t play today have a big chance on Wednesday to play. We are not going to win the Premier League with just 11 players, or reach the finals or semi-finals of other competitions.”

Man of the match – Bernardo Silva

Pep Guardiola said at the start of the season that City were becoming ‘Bernardo Silva plus 10 others’.

Not quite – City have quality everywhere – but this was yet another deserved Premier League man-of-the-match award for the Portuguese maestro. Clean, crisp and clinical, Bernardo Silva is the perfect long-term replacement for his namesake David.